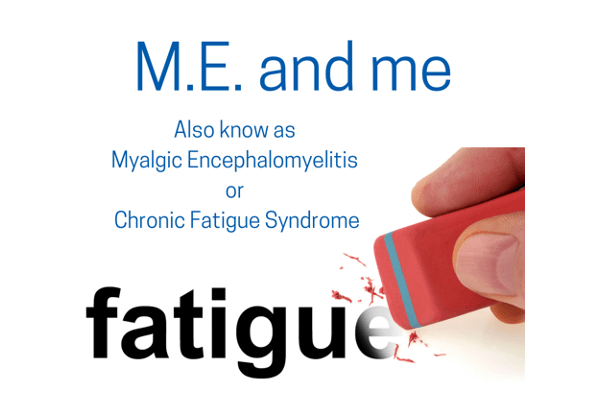 “In 1993 I was at work with a heavy cold, aching joints and headaches. I had felt like this before, so it was nothing different. On the Thursday I blacked out in work and was told by the GP, I had a virus and to rest. We were busy that weekend and so I went back into work saying “I would be fine”. On the Sunday morning after having finished at 2am, I woke to having no feeling in my legs. I could not feel anything from the waist down. My initial reaction was panic. I did not know if I had trapped a nerve or if it was something more sinister, but there was simply no feeling.

“The doctor came out, could not find anything specifically wrong and so prescribed anti-inflammatories along with plenty of rest. Bloods were also taken to see if anything showed up.

“This was the beginning of almost three years of tests, different hospitals and consultants, all with no clear results. Finally, in 1996 I was diagnosed with M.E. I was living at my parents, in their living room on the sofa bed and my mode of transport was a wheelchair.

“Over the three years, feeling had started to return to my legs and left me with what I can best describe as chronic pins and needles. Nothing helped with the pain and any attempt to move increased the feeling. Then at a routine doctor’s appointment I was told that the muscle wastage I was developing would keep me immobile and wheelchair-bound unless I could find the willpower to start some strengthening therapy.

“I made a decision that day and started physiotherapy. The pain was excruciating. Each session totally exhausted me, increased my pain and took days to recover from, but I was determined to work through, manage the pain, in order to get back some strength. I wanted and needed to be mobile again.

“It took a further eighteen months before I returned to any work. I tried to go back to my previous employment but the length of shifts and physicality of the role made it impossible.

“I have had to utilise my skills to carve out a new career and it has been very up and down. My health can crash, leaving me completely exhausted and in severe pain. Sometimes, affecting the amount of work I can undertake, but with pure strength of will I do not let the condition I now live with control and define what I can do. The mornings are the worst, I struggle with the pain in my back, hips and legs and on really bad days in my forearms and hands.

“Treatments are something that have been difficult to get to grips with. Some things I have tried have no impact at all, some make a difference for a short time. Osteopathy keeps flexibility in my joints and helps settle the nerve pain. The muscle wastage around my hips, especially on my right side, means that my hip joint moves and clicks really painfully on occasion, but osteopathic treatments can make it a little easier to contend.

“To look at me, as with some other conditions, you would not think there is anything wrong, but its impact is vast. I suffer with increased pain in cold temperatures, exhaustion, even after a night’s sleep. Exercise deflates me, even after a shower in the morning, I could very easily go back to bed and I get migraines now that I never used to.

“It has been 28 years since that first blackout and I am realistic about the levels my body can work to. Do I challenge it on occasion, yes I do. Why wouldn’t I? Do I wish I was pain-free, of course, but I do not know what it is like to live without it now.”

This article is written by a member of Shefford Osteopathic Clinic team. We thank her for sharing her story on ME Awareness Day.