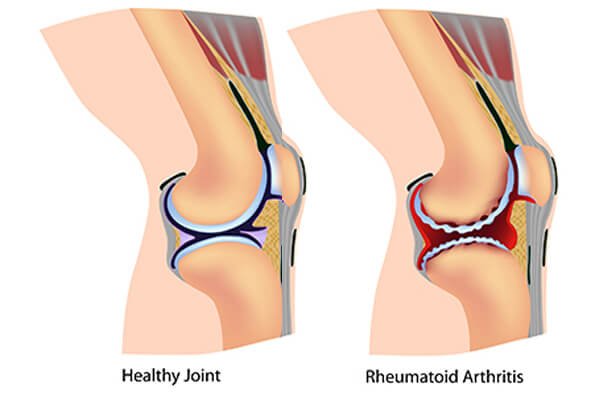 What is rheumatoid arthritis?

Rheumatoid arthritis affects different people in different ways, so it’s difficult to predict how it might develop.

There are approximately 20,000 new cases of rheumatoid arthritis in the UK every year.

A study of a large group of people with the condition gave the following results:

Most people can have periods of months or years between flare-ups and appropriate treatment can help to reduce symptoms.

Want to learn more about Rheumatoid Arthritis?
We look in more details below at the symptoms, causes, treatment and how osteopathy can help.

If you want to find out more about different types of arthritis, click on the appropriate box below:

Rheumatoid arthritis varies from one person to another but it usually starts quite slowly. A few joints – often your fingers, wrists or the balls of your feet – become uncomfortable and may swell, often intermittently. You may also feel stiff when you wake up in the morning which eases by mid-day.

It is usually a chronic relapsing condition. Chronic means that it is persistent. Relapsing means that at times the disease flares up (relapses), and at other times it settles down. There is usually no apparent reason why the inflammation may flare up for a while and then settle down.

If untreated, most people with rheumatoid arthritis have this pattern of flare-ups followed by better spells. In some people, months or even years may go by between flare-ups. Some damage may be done to affected joints during each flare-up. The amount of disability which develops usually depends on how much damage is done over time to the affected joints.

For about 1 in 5 of those with rheumatoid arthritis the condition develops very rapidly, with pain and swelling in a lot of joints, severe morning stiffness and great difficulty doing everyday tasks.

If you have painful, swollen joints and stiffness in the morning that lasts for longer than half an hour, you should see your doctor.

Research shows that the sooner you start treatment for rheumatoid arthritis, the more effective it’s likely to be, so early diagnosis is important.

Rheumatoid arthritis is a form of arthritis caused by inflammation in the synovium. 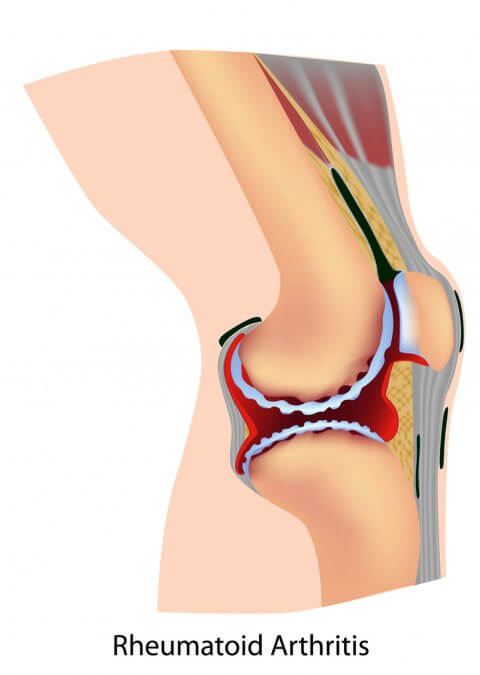 The synovium is a membrane (thin layer of cells) that lines the joint capsule which covers each of your joints. When antibodies attack the synovium, they leave it sore and inflamed. This inflammation causes chemicals to be released, causing the synovium to thicken. These chemicals can also damage bones, cartilage (the stretchy connective tissue between bones), tendons (tissue that connects bone to muscle) and ligaments (tissue that connects bone and cartilage). The inflammation is caused by a build-up of fluid and cells in the synovium. Your joint hurts for two reasons:

When the inflammation goes down, the capsule stays stretched and can’t hold your joint in its proper position. This can make your joint unstable, and it can move into unusual or deformed positions.

Rheumatoid arthritis is a chronic, progressive and disabling auto-immune disease.  It is a painful condition, can cause severe disability (this varies between individuals and depends on how severe/aggressive the disease is) and ultimately affects a person’s ability to carry out everyday tasks. The disease can progress very rapidly (again the speed of progression varies widely between individuals), causing swelling and damaging cartilage and bone around the joints.

Any joint may be affected but it is commonly the small joints: hands, feet and wrists and often affects the same joints on each side of the body.   It is a systemic disease which means that it can affect the whole body and internal organs such as the lungs, heart and eyes (although this is not the case for everyone with rheumatoid arthritis).

It is not clear why this happens. Some people have a tendency to develop auto-immune diseases. In such people, something might trigger the immune system to attack the body’s own tissues. The trigger is not known.

There’s some evidence that lifestyle factors may affect your risk of developing the condition. Rheumatoid arthritis is more common in people who:

Rheumatoid arthritis is less common in people who:

The genes you inherit from your parents may increase your chances of developing rheumatoid arthritis, but genetic factors alone do not cause it. Even if you have an identical twin, who shares all the same genetic material as you, and they have rheumatoid arthritis, you only have a 1 in 5 chance of developing it too. And if some of your family have it, the severity can be very different from person to person.

The new Arthritis Research UK Rheumatoid Arthritis Pathogenesis Centre of Excellence will look into where and why rheumatoid arthritis starts. Researchers at King’s College London and the University of Manchester, funded by Arthritis Research UK, have also recently developed a new method to identify people that are at a very high-risk of developing rheumatoid arthritis, using a simple blood test and information about their smoking habits.

The National Institute for Health and Clinical Excellence (NICE) has produced guidance for the management of rheumatoid arthritis in adults.

The main aims of treatment are:

Self-management is an important part of rheumatoid arthritis care. Staying physically active is the key to keeping joints flexible. Too little movement can lead to joint stiffness. Strong muscles protect joints. Overall fitness improves health in many ways. Managing your weight, eating a nutritious diet and getting a good balance of rest and activity each day are important too.

How will osteopathy help?

If you are suffering with rheumatoid arthritis you would benefit from having regular osteopathic treatment when you are in not suffering a “flare-up”.

During a “flare-up” your joints are going to be red, swollen and painful and you are not going to want to move them.  To avoid moving them you will tighten up all the local muscles to act like a brace and adopt a position with your body that causes you the least pain.  You may well then use your body in unusual ways so that you can keep moving and doing things, but this will put stress on other parts of your body as you compensate.  We will not treat during a “flare-up” as this is a contraindication for treatment.

Once you are able to have treatment, we would recommend that it is vital that you are assessed and have treatment to enable your body to return to how it should be working correctly.  We would work on the joints that have the rheumatoid arthritis and gently stretch and articulate them, keeping as much movement as we can and looking at the surrounding muscles and make sure that they are not becoming short and tight.  We would then look at the rest of your body and make sure that each joint has as much movement as it can and that the muscles are all working correctly.

Our aims are as above – get you moving and out of pain and to minimise any disability that you might be at risk developing.