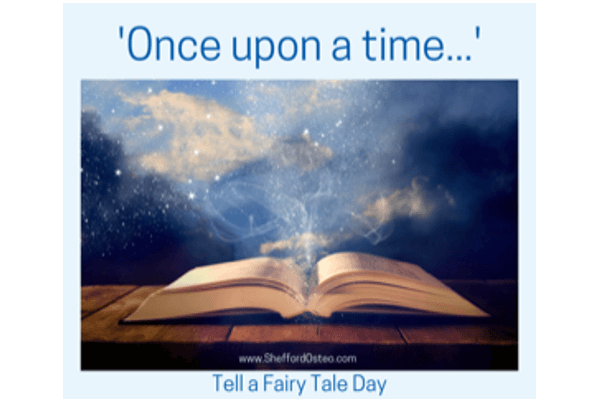 26 February is ‘Tell a Fairy Tale Day’ and I think more than ever we need some fantasy and magic, where there is a happy ending.

What were once oral histories, myths, and legends retold around the fire or by traveling storytellers, have been written down and become known the world over as fairy tales.

The origins of most fairy tales were unseemly, and most were told as a way to make children behave, teach a lesson or pass the time.

Many of us have read the Brothers Grimm fairy tales; Hansel and Gretel, Rumpelstiltskin, Snow White and the Seven Dwarfs and those by Hans Christian Anderson; The Princess and the Pea, The Red Shoes and The Emperor’s New Clothes.  How many can you remember?

As it is often claimed Albert Einstein once said, “If you want your children to be intelligent, read them fairy tales. If you want them to be more intelligent, read them more fairy tales.” We might not expect such high praise for fairy tales from a world-famous theoretical physicist, but Einstein recognised the importance of the imagination. Fairy tales are incredibly valuable for both children and adults when it comes to learning about the world in which we live and developing our capacity for creativity. Fairy tales have also been considered fertile ground by psychoanalysts. With their twists and turns, age-old themes and familiar characters, our favourite stories may reveal not only the workings of our personal subconscious but also the fundamental elements of our collective psyche.

So maybe today spend some time remembering your childhood.  Maybe read to your children, remember your favourite fairy tale and enjoy the “Once upon a time…” and “and they all lived happily ever after.”

You could also try writing your own fairy tale – look online for tips.

This article was written by Karen Robinson, our Clinical Director.