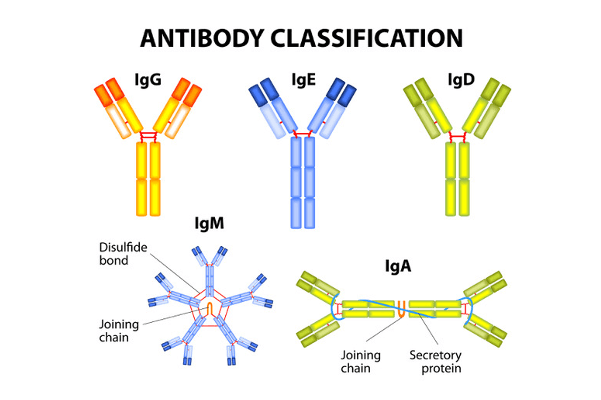 This article is written by Karen Robinson, our Clinical Director and founder of Shefford Osteopathic Clinic.

I shared a video a few days ago on our Facebook page which explained a little more about the immune system and how it works. (You can watch the video here.) There were some names and terms that were used and I thought I would explain more about them here.  They were talking about IgG and IgM.

Once B-Lymphocytes spot the antigen (any substance that can spark an immune response – bacteria, fungus, virus, toxin, drugs) they begin to secrete antibodies, (antigen is short for “antibody generators”).

Antibodies are special proteins that lock on to specific antigens. Each B cell makes one specific antibody. For instance, one might make an antibody against the bacteria that cause pneumonia, another different one for chickenpox and so on.

Antibodies are part of a large family of chemicals called immunoglobulins, which play many roles in the immune response, and they can be measured by doing a blood test.

The five types of antibodies:

Antibodies lock onto the antigen, but they do not kill it, only mark it for death. Think about a crowd of people – how do you recognise the invader? Think about the antibody being a tall coloured hat, easily seen and recognised.  The killing is the job of other cells, such as phagocytes.